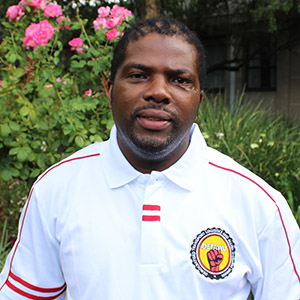 The general secretary hails from the far north part of the Province of Kwazulu Natal in a dusty underdeveloped village called Ekuhlehleni (Ingwavuma).

He grew up within the ranks and file of the workers struggle. Whilst employed at Omega Risk solution in 1997 he was first elected as a shop steward for Transport & general Workers Union which later merged with SARHWU to form SATAWU.

He was dismissed for leading the workers into a prolonged strike for trade union recognition in the company and had a physical altercation with the company owner during the strike.

At Chubb he got elected as a full time shop steward for SATAWU in 2001, a position he held until the union deployed him to Mpumalanga Province for the position of an organiser for Witbank and surrounding areas.

Whilst still in Gauteng in 2001 he was elected as a Springs COSATU Local Deputy chairperson and later become a chairperson. He served in COSATU PEC in Gauteng until he left for Mpumalanga in 2004.

In Mpumalanga Province he served as the union organiser until workers identified leadership qualities in him and elected him into a Provincial Secretary position in 2007.

He served as a Provincial Secretary until 2015 where he was removed from the union without a disciplinary enquiry having served 3 uncontested terms of office.

He served as a member of COSATU Provincial Executive Committee (PEC) for 9 years unbroken service.

After his expulsion/dismissal from SATAWU he working with other comrades took a decision to form a union in recognition of the prevailing material conditions confronting workers who were wrongfully ejected from their own union.

In the launching Congress of DETAWU he was elected the founding General Secretary of the union a position he still holds.

His father was a garden boy and her mother was a kitchen girl.

He is a member of the SACP since from 1996 and ANC from 1993. He has served in different structures of both these organisations.

The union was formed at its inaugural launching Congress on 24 September 2015 at Pretoria. The Congress was blessed by the attendance of comrades from five (5) Provinces of the Republic of South Africa.